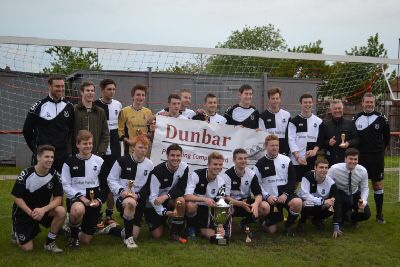 Both teams qualified with strong semi-final wins and Wallsend were fresh from winning the league title.

In a high quality game which was hugely entertaining from the first whistle, Wallsend took the lead with a fantastic volley from about 20 yards out which flew into the top left corner.

Cullercoats fought back and controlled the ten-minute period before the break and equalised with a thunderous strike from the left edge of the 18-yard box by Hylton Hub.

They went close again before the break with a couple of chances that were blocked and saved.

The second half was equally competitive with both sides striking the woodwork and both keepers making excellent saves.

However, it was Cullercoats who made the breakthrough with 20 minutes remaining from an excellent left wing delivery which was pushed against the woodwork before dropping to Alan O’Donnell who headed in from close range.

Wallsend pushed forward in search of an equaliser with Cullercoats defending deep and they created several half chances, with Scott Mason standing firm in the Cullercoats goal with some fine saves.

However, with five minutes remaining Wallsend got the equaliser to push the game into extra time.

Both teams gave everything in the additional 30 minutes but neither could find the winner.

Wallsend went close in the dying moments with a well taken free kick on the edge of the 18-yard box, which was impressively saved by Mason to force a penalty shoot-out.

The game was of the highest quality and played in a great spirit throughout.

Wallsend’s Mason Stephenson was named man of the match and both teams picked up trophies on the night with Wallsend receiving the league winners trophy and Cullercoats becoming the first winners of the champions league cup.

Cullercoats U21s are seeking to strengthen their squad for the 2014-15 season and players are invited to training sessions at 6.30pm Wednesdays and 11.30am Sundays at their Links Avenue pitches.

Cullercoats also thanked team sponsors, Dunbar Plastering and Malone Engineering, for their support over the season.