A comfortable 4-0 victory over Felling Magpies saw our Seniors promoted to the Northern Alliance Premier Division. 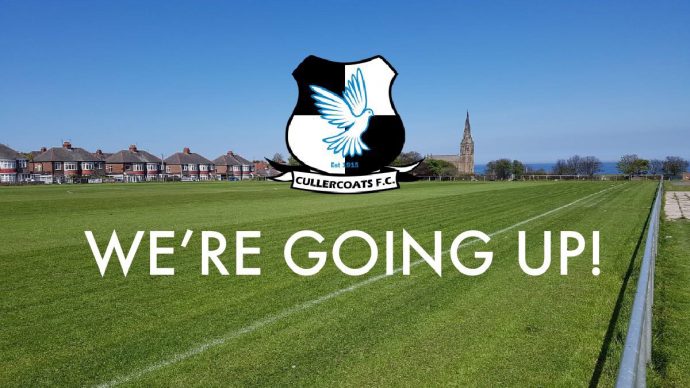 On Saturday 11 May 2019, Cullercoats seniors entertained Felling Magpies in their final Northern Alliance First Division game, knowing that a win would seal second place and promotion to the Northern Alliance Premier Division.

The deadlock was broken on 20 mins when midfielder, Chrissy Connor, converted a cross from full-back, Simon Wilson to make it 1-0.

Cullercoats continued to press and Phil Smith, midfielder, finished well on 36 mins to extend the home lead to 2-0.

The first half was wrapped up in style on 40 mins when captain, Carl Patterson, went on a solo run from the centre circle, beating several Felling players, before slotting the ball past the advancing keeper to make it 3-0 at the break.

Cullercoats missed a string of good chances in the second half, before Simon Wilson wrapped things up on 83 mins with an excellent driven shot to make the final score 4-0, and trigger the celebrations.

The result added to Cullercoats Combination Cup success last month and also sets up a fantastic season finale when they meet neighbours, Blyth Town, in the Northumberland FA Minor Cup Final at St. James’ Park on Thursday 23 May 2019. The final kicks off at 7.30pm.

Public access is £5 for adults (£3 concessions and children) via the East Stand.