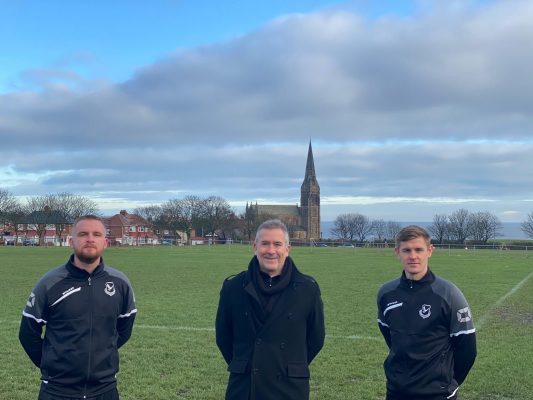 Cullercoats Football Club is delighted to announce the appointment of a joint management team at senior level.

Michael outlines his thoughts on the appointments, “I’ve always wanted to get into management and coaching when I finished playing and, after retiring at the start of the season, it was just a case of waiting for the right opportunity.”

“This is a fantastic club that is on its way up and is now in a great position, thanks to Dan (Daniel Iredale) and the rest of his staff. Hopefully, Graham and I can improve on that success and push the Club further forward”.

Graham explains, “I’m delighted to be given an opportunity at Cullercoats in what is my first managerial position. When Michael asked me to join him in a joint role, it was an opportunity that could not be missed. The foundations have truly been set over the last 2-3 years, which we will look to build upon and progress; taking the Club to an even higher level.”

“I’m looking forward to the challenge that management brings and having a positive effect upon the team. Once it’s safe and we are allowed to return to playing, we aim to hit the ground running”.

Gary Stephenson (Club Chairperson) is absolutely thrilled to welcome the new arrivals. He states “Michael and Graham are both former Cullercoats players, who understand the Club history and philosophy. They are proven winners, with significant playing profiles in the region. The lads are raring to go as soon as we return to playing in the coming weeks.”

“I would also like to take this opportunity to publicly thank Daniel Iredale and his coaching team for their superb work over the past three seasons, in building the foundations and achieving success on the pitch with the senior team. This includes a cup win and promotion.”

“Everyone at Cullercoats wishes them every success in their new roles in the Northern League”.