Cullercoats Seniors were beaten 4-3 (AET) by Newcastle University FC in a thrilling final of the Reeves Independent George Dobbins Cup. 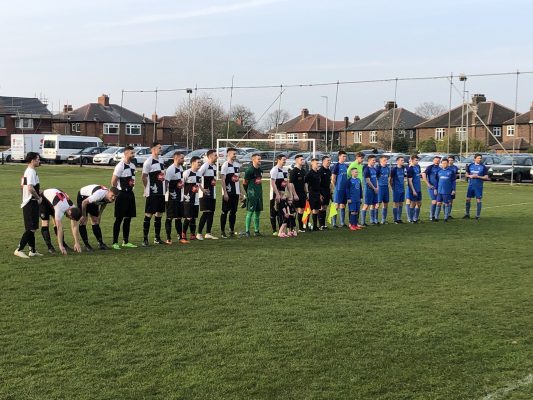 In the Reeves Independent George Dobbins League Cup Final, Cullercoats started on the front foot, pressing Newcastle University FC from the first minute. While Newcastle were comfortable on the ball, on a bobbly pitch the high press was always going to get results.

Despite the uni’ having good chances to go ahead from corners, it was Cullercoats who took the lead on 18 minutes. Jake Greener closes down one of Newcastle’s centre backs to win the ball from a goal kick, laying it off for Chris Connor to go through and bury the ball hard and low into the net.

Despite this, Newcastle kept trying to play their game, and on 32 minutes, were punished again. Another short goal kick, this time the centre back’s clearance was sliced high with no distance. Dillon Blake controlled the ball superbly before carrying the ball through himself to make it 2-0.

After this Newcastle began to put pressure on to Cullercoats, who had to absorb it and control the game. Just before half time, Connor was fouled on the halfway line while tactfully holding the ball up.

The resulting free kick was taken quickly by Simon Wilson, with the uni’ not switched on, playing Graham Williams in behind their left back. Williams hit the ball hard and low across the box, and although Newcastle University goalkeeper, Harrison Avery, got a touch, he couldn’t stop it from reaching Connor for his second goal, to make it 3-0 going into half time.

Coming out for the second half Cullercoats knew the university side would come back at them, with a very young and athletic side. The pressure was piled on and the first goal back was inevitable.

A low cross was cut back to the edge of the box for a late arriving striker who fired a shot towards goal. The shot bounced awkwardly in front of Cullercoats goalkeeper Andrew Clemett, ending up in the corner of the Cullercoats goal.

On the hour mark, the Doves’ lead was cut to one goal. Cullercoats switched off to a quickly taken corner. The ball was carried into the box from the right, with a cross drilled hard and low in front of goal. The cross deflected off of a Cullercoats defender and into the goal at the near post, passed a stranded Clemett.

Two minutes later, it could have been level. Cullercoats switched off again, this time to a quickly taken throw-in, putting a Uni’ winger in behind. The cross was headed towards goal but only hit the post, bouncing out to the edge of the box resulting in a low drive towards goal which was well saved.

However just shortly after surviving that, the leveller came. A simple corner into the box was headed into the goal at the front post.

Cullercoats grew back into the game at this point, resulting in a thrilling end to end affair. Elliot Mitchell was desperately unlucky in the 90th minute not to give Cullercoats the win. A header back across goal from a free-kick was cleared off the line, just before the final whistle.

As the match entered extra time, it was the university side who had the upper hand, showing more fitness than a weary Cullercoats side. Nevertheless, Cullercoats were the side closest to going in front in the first half of extra time. A long throw launched into the box was flicked on, and then headed towards goal, only to be cleared off the line by a well positioned defender.

Then it was Newcastle’s turn to go close, at the start of the second half of extra time. A cross into the box was headed clear, but the clearance was met with a perfectly struck shot, which rocketed towards goal from 25 yards, passed a helpless Clemett, only to be denied by the post.

However, late on in the second half of extra time, Newcastle University got the goal to win the game. Striker Lee Scott was played in behind the Cullercoats defence, and smashed a shot high into the goal passed our goalkeeper.

That goal would be enough to see the University through to the final whistle. Both teams played their part in a brilliant final, and our lads can hold their heads high knowing they pushed one of the best teams in the Alliance all the way.

Cullercoats Seniors are in action again in the Team Valley Carpets Combination Cup Final, this time against Prudhoe YC FC, to be played at Birtley Town FC on April 25th, kick-off 7:00PM.